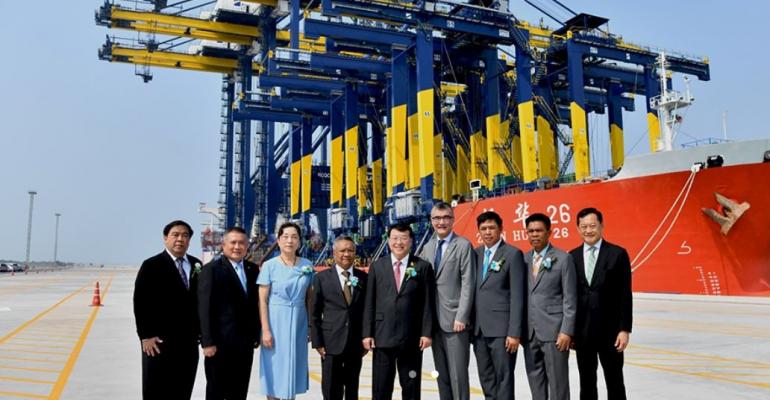 Hutchison Ports in Thailand is gearing up to handling larger vessels on the mainline east – west trades as it officially starts operations at its $600m Terminal D in Laem Chabang.

Terminal D was officially opened last week and will fully come onstream by 2023 adding 3.5m teu in capacity at the Thai gateway port. Once completed Hutchison Ports terminals at Laem Chabang will account for roughly half the port’s total container handling capacity of 6m – 6.5m teu.

Speaking to Seatrade Maritime News, Stephen Ashworth, managing director – Thailand & South East Asia for Hutchison Ports, says the new berths had been designed to handle vessels of up 200,000 dwt, larger than those than that have been calling at the port and it has introduced quay cranes with 24-boxes outreach.

The new terminal enables the terminal operator to handle 14,000 teu capacity vessels from one of its top customers Japanese joint venture Ocean Network Express (ONE), which is part of The Alliance with Hapag-Lloyd and Yang Ming.

“The Alliance are very strong here and that’s driven by the fact the Japanese lines are historically significant players in Thailand on the liner side,” Ashworth says.

While something of a deviation away from the main east-west trades Laem Chabang has been successful in attracting mainline calls driven by volumes from Thailand’s export led economy.

While intra-Asia volumes account for around 70% of Hutchison’s volumes in Laem Chabang, with the market to North Asia particularly strong, the volumes from direct calls on the mainline trades are growing.

ONE’s alliance partners Hapag-Lloyd and Yang Ming are also expected to add vessels of 14,000 teu in capacity. In theory the terminal could handle vessels of up to 18,000 teu but Ashworth does not see this happening any time soon due to the port’s physical location and tidal restrictions for ships of such a size.

With the terminal handling larger vessels it has opted for semi-automation with remoted controlled quay cranes and rubber-tyred gantry cranes in the yard. Ashworth explains that the terminal operator decided on automation not to save costs, but because it should increase quayside productivity by about 20% and it’s much safer, with the workers operating a much more comfortable environment with a greater visibility of operations.

Looking ahead he says the immediate plans are to complete the works for Terminals D1, D2 and D3 to be fully operational by 2023. “Whether in parallel to that we look at Phase 3 as possibility to invest, it depends on a number of factors, we’ve got to study the revised terms the port of Thailand have issued and we have discuss this internally and with potential partners,” Ashworth says.