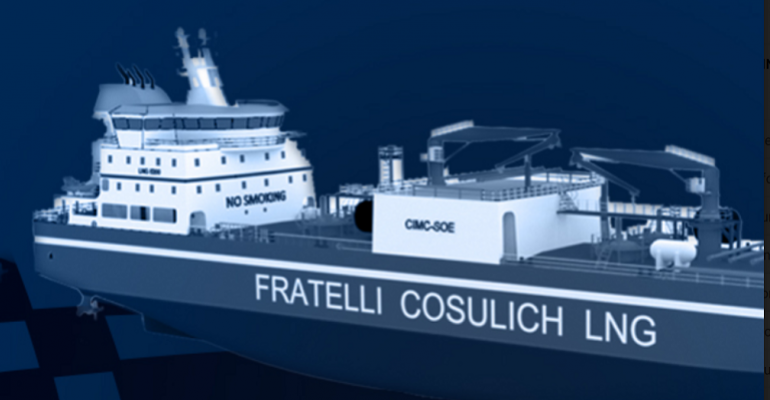 Fratelli Cosulich has ordered an LNG bunkering vessel for $45m in China.

The Italian shipowner is the latest bunker supplier to react to developments of LNG as marine fuel ordering a 5,300 dwt LNG bunker tanker from CIMC SOE with a capacity of 8,000 cu m of LNG and 500 tonnes of MGO.

Due for delivery in 2023 the tanker will be equipped with a cargo management system designed and built by Wartsila Gas System. The Italian shipowner has also established a new company Fratelli Cosulich LNG which will manage the newbuilding.

"We established Fratelli Cosulich LNG with the aim of reaffirming the leadership and entrepreneurship that the Group has always shown in our business field,” said Honorary President of the Group, AndreaCosulich.

“We acted proactively, in order to offer the coverage of the Mediterranean basin, following the trend that sees new ships under construction equipped with alternative propulsion, especially in the field of passenger ships. Our Group will be ready to offer its services with cutting-edge solutions and in line with the evolution of technology itself.”

The new LNG bunker tanker is financed with support from BPER Banca, Banca Popolare di Sondrio, and Cassa Depositi e Prestiti, and Sea, it could be awarded a grant of EUR4.5m by the European Union under the Connecting Europe Facility (CEF) programme.