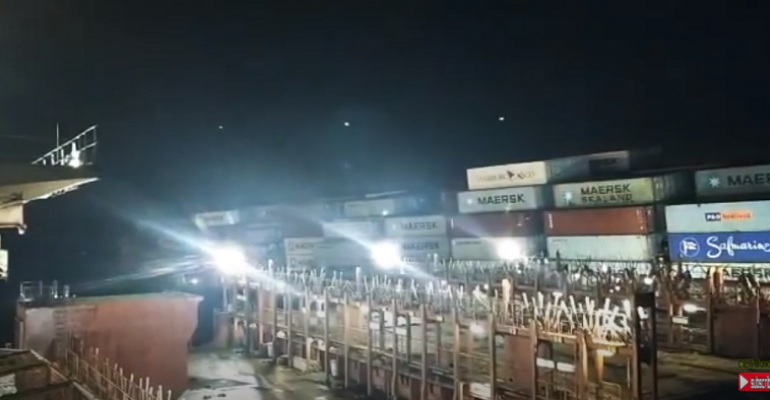 In a freak accident Greek containership Tina I has grounded off Batam, Indonesia, colliding with an Iranian containership Shahraz, which has been grounded at the same location for six months.

The Cyprus-flag, 67,270 dwt, 2004-built, Tina I ran aground near Batu Berhanti at 23-40hrs on 22 November appearing to collide with stern of the Shahraz. Local reports confirmed the grounding and that it was being investigated by the Basarnas Batam post.

Based on vessel traffic data the Greek-owned and managed Tina I had sailed from Pasir Panjang terminal in Singapore at 23-00hrs bound for Jakarta, Indonesia and headed towards the eastbound lane of the Traffic Separation Scheme in the Singapore Strait. An industry source said the Master could have become disorientated at night in the busy shipping lane.

Video shows the Tina I aground and is listing next to the stern of Shahraz.

The 2008-built, 86,018 dwt, Iranian-flagged containership Shahraz having apparently suffered a broken-back and grounded following a collision with the 2001-built 23,573 dwt Indonesian-flagged bulker Samadra Sakti, on 11 May this year. The Iranian ship has remained aground in Indonesia waters since then.