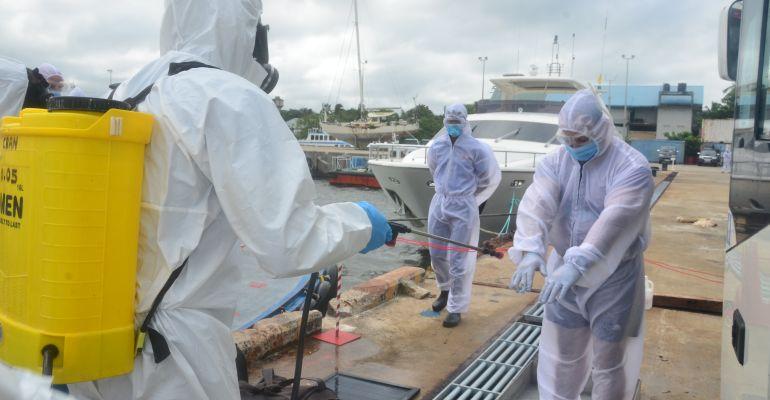 While much about Covid-19 is yet to unfold, it’s reasonable to assume that the pandemic’s most profound and poignant legacy in the shipping industry is the crew change crisis.

As a ship agent responsible for port and husbandry services, GAC has seen the crisis evolve on the ground, and has had to deal with the sometimes difficult restrictions implemented to control the spread of the virus. Since Q1 2020, we have witnessed first-hand reams of heart-breaking frontline accounts, revised government instructions – sometimes changing daily – as well as new medical advice. All this has prompted the most instantaneous and staggering changes in crew change operational procedures ever seen in the modern global era.

“The regulations are changing by the day. As there’s limited written information, the predominantly verbal communications present a challenge for us in guiding customers,” commented Johan Thuresson, GAC Dubai’s General Manager - Shipping Services.

Many countries are not allowing seafarers of other nationalities to sign on/off. Elsewhere, crew changes are only permitted at anchorage or Off-Port-Limits (OPL). The extensive measures are rapidly developing, and usually becoming increasingly stricter. GAC is providing constant updates to the industry through its Hot Port News bulletin and dedicated Covid-19 webpage.

In July, GAC India navigated the procedures in a massive crew change operation to bring home 3,000 Indian seafarers who had been working on Holland America Line, Princess Cruises and Seabourn cruise ships. The end-to-end support for the repatriating crew includes arranging Covid-19 tests and quarantine as necessary upon arrival, as well as making all transfer arrangements.

As aptly put by Marc Nordblad, GAC Abu Dhabi’s Business Manager - Shipping: “In normal circumstances, and with proper planning, crew changes happen seamlessly and without interruption. None of that is true during Covid-19; we can consider every crew change exceptional.”

In some areas, crew changes had become almost impossible in practical terms due to the closure of many airports, including those in Jordan, Lebanon, Guyana and Panama, for varying periods. Throughout the pandemic, the chaos that followed widespread international flight restrictions has been widely discussed.

“The limiting factor is the amount of flights available for seafarers to get home in a timely manner… and visa expiration for non-EU crew,” said Tom Hanoy, Operational Manager at GAC Norway. In Hanoy’s experience, Filipino seafarers been particularly badly affected.

Flight scarcity ushered in an era where extraordinary measures are required to get off-signing seafarers home. In Norway, GAC completed a crew transfer using a high-speed rigid inflatable boat (RIB) for crew that had overstayed their time at sea; some by weeks, and a few by months. In the UK, a London-based coach provider was called to Aberdeen, Scotland, to provide seafarers with a socially distanced crew transfer, complete with screens between the driver and passengers.

More mobility was noted in North America, but even there, there is no greater clarity on the long-term outlook. Darren Martin, GAC North America’s Managing Director explained: “We will continue to see crew changes in the US as regulations appear to be a bit more lenient. The biggest overall issue is flight availability; and we don’t see that getting better anytime soon.”

In Africa and the Middle East, further layers of permissions remain necessary. For example, GAC Angola arranged for crew change from a well stimulation vessel to be disembarked under special permission from the Ministry of Health and Covid-19 Commission for onward repatriation to India, in a chartered humanitarian flight organised by the Indian Embassy. In Oman, a domestic flight was used to transfer crew from Duqm to Muscat International Airport.

One country that has proved an exception is Finland, where seafarers have been designated key workers throughout the pandemic, enabling crew changes to continue restriction-free and providing an option for seafarers from neighbouring countries.

“We arranged Russian crew repatriations from all over the world through the Finnish-Russian land border when Russia closed all foreign air traffic,” said Ville Marchant, GAC Finland’s Cruise Agency Manager. Other countries have since sought to replicate Finland’s model, with the IMO confirming it has received official communications from almost 30 countries expressing their support for the campaign to designate seafarers as key workers.

With crew remaining on board beyond their contracted period, extreme mental stress and fatigue has set in, raising industry concerns about their physical and psychological welfare.

“This is an extremely difficult situation for crew to be away from their family,” said Anupama Kale HR Manager at GAC Marine in Abu Dhabi. “For crew motivation, we have extended our support from shore.” She also highlighted the financial pressure inflicted by the crisis: “Shipping operators are already under financial pressure, with ships being idle. Covid-19 tests are expensive, and many crew members are being paid a salary to stay longer onboard, or spend time in quarantine.”

GAC North America cited another expense - seafarers with expired visas must be placed under guard until they fly out of the USA, at significant expense to the ship owner.

That’s the big picture. There are countless little ones. In India, seafarers are sometimes perceived as Covid-19 carriers. That is not necessarily true, says Sankar Narayanan, Manager, Shipping Services at GAC India, due to strict social distancing and safety norms in place at sea. “It would help if operations are undertaken to ensure their physical and mental wellbeing,” he added.

Meanwhile, in Brazil, local interpretations of national guidelines exasperate crew change difficulties. Rodrigo Kill, General Shipping Manager at GAC Brazil, said: “The major problem is that although there are guidelines provided by the federal government, local port authorities have the right to impose the procedures according to their own understanding”.

Around the world, uncertainty persists with regards to when normality will return for crew changes.

“We must also be prepared that the situation will constantly change depending on the pandemic, and we need to keep our fingers on the pulse,” said Ibrahim Attieh, GAC Jordan’s General Manager.

Eric Barnard, Managing Director of GAC South Africa, however, expressed some optimism: “We expect crew changes to be permitted again once we have passed our Covid-19 peak, with fewer cases and at lower levels of lockdown. When this happens, we expect to be inundated with crew change enquiries.”