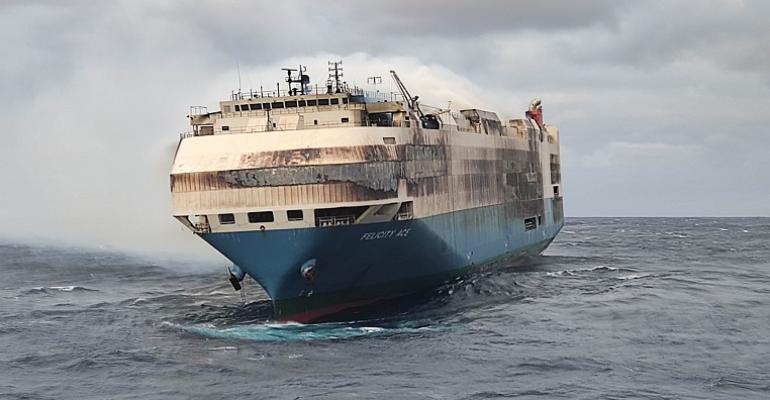 Growing volumes of lithium-ion (li-ion) battery shipments are a major hazard across all transport modes. but container ships and vehicle carriers are particularly vulnerable.

The UK P&I Club and the TT Club, both managed by insurance services group Thomas Miller, and its technical consultancy subsidiary, Brookes Bell, are the latest experts to focus on the dangers associated with the transport of li-ion batteries.

Battery-related fires are now shipping’s most expensive cause of loss, according to research undertaken earlier this year by Allianz Global Corporate & Specialty into claims in the marine sector.

Larger vessels, rising demand for electric vehicles (EVs) and the rapidly increasing volume of battery shipments, are all contributory factors and are compounding the risks. In a new White Paper, Brookes Bell experts call for shipping to adopt a much more robust approach to li-ion battery-related risk management.

In many cases, however, ships’ crews have few options. Undeclared or misdeclared cargoes are one problem, but a fire in a container position low in a stack is, to all intents and purposes, completely inaccessible. Once a fire takes hold, the likelihood is that it could engulf the entire vessel.

Related: The risks faced by seafarers in electric vehicle fires

When a li-ion battery fails, the consultants said, the speed of failure is almost immediate, producing significant quantities of toxic, corrosive and flammable gases, and intense heat of 450°C and more. Explosive atmospheres can be created but continue to be underestimated, Brookes Bell said.

Fire-fighting materials such as CO2 and foam, meanwhile, are entirely ineffective in fighting such fires. Large volumes of water are needed, although the risk of electrocution is a further concern. Smoke may contain highly toxic vapours and fumes and, the experts said, fire-fighters, if they do have access, are traditionally taught to ‘go in low’ but since the vapours may be heavier than air, this may well be the wrong approach.

In analysis earlier this year, Allianz identified four common causes of li-ion fires. The insurer listed substandard manufacture, over-charging, over-temperature by short-circuiting, and damaged battery cells. Experts point out that EVs are effectively ‘rolling cargo’ – in other words, they are loaded on to car carriers, for example, under their own power. Their batteries are, at least, partially charged.

The UK P&I Club’s Loss Prevention Director, Stuart Edmonston, commented: “The consequences of battery failure and the resultant thermal runaway must be clearly understood and the correct procedures for handling them adhered to throughout their lifespan. The dangers can exist no matter the status of the battery; charged, semi-charged, used, secondhand or scrap, and whether present in devices and vehicles or packaged separately.”

Meanwhile, Brookes Bell Managing Scientist, Karwei So, warned: “While increased industry awareness is crucial and technology to monitor and restrict fires is advancing, the increased capacities of batteries and the expected rise in trade volumes means regulations are potentially not fit for purpose, having been slow to catch up.”

The Allianz analysis revealed that fires and explosions accounted for 18% of the $9.2bn total of marine claims in 2021.