Salvors struggling to attach tow to burnt out X-Press Pearl 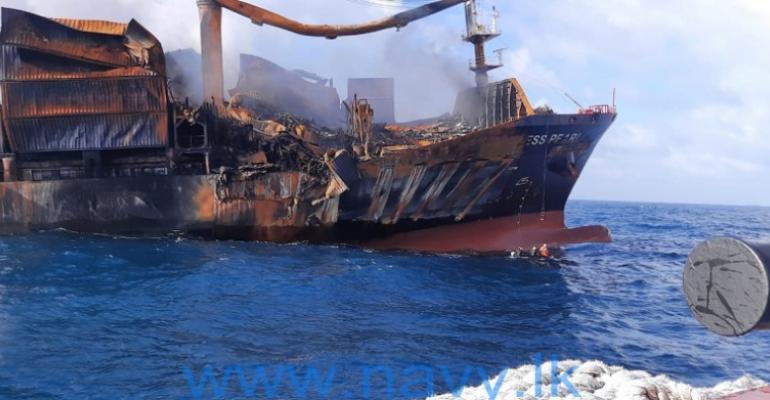 Sri Lankan Navy team boarding the X-Press Pearl
Salvors are struggling to attach a tow to the burnt-out hull of the X-Press Pearl, and have concerns over stability of the stricken vessel off Sri Lanka.

Singapore shipowner X-Press Feeders said an inspection team had been able to board the vessel on 1 June and found the engine room to be flooded, which gives rise to concerns that the ship could sink. “There are now concerns over the amount of water in the hull and its effect on the ship's stability,” the company said.

Cargo from the X-Press Pearl has already washed up along a significant part of Sri Lanka’s shore line and there fears major environmental damage from a bunker spill if the vessel sinks and breaks up. To date no leak has been reported from the ship’s fuel tanks.

There were no visible flames reported from fire, which started on 20 May, but smoke was still seen coming from cargo holds 1,2 and 3.

Meanwhile salvors attempted to attached tow line to the stricken hull to tow it further away from the Sri Lankan coast, however, efforts were aborted after several failed attempts due to safety concerns.

“A team has reboarded the vessel again today for further investigations and to renew attempts to make a line connection on the bow. If the connection is made, the ship will be towed in a westerly direction, away from the coastline,” X-Press Feeders said on Wednesday.

The Sri Lankan authorities have launched a criminal investigation into the casualty and X-Press feeders said that “select seafarers continue helping local police with their enquiries into the fire and are cooperating with investigators”.