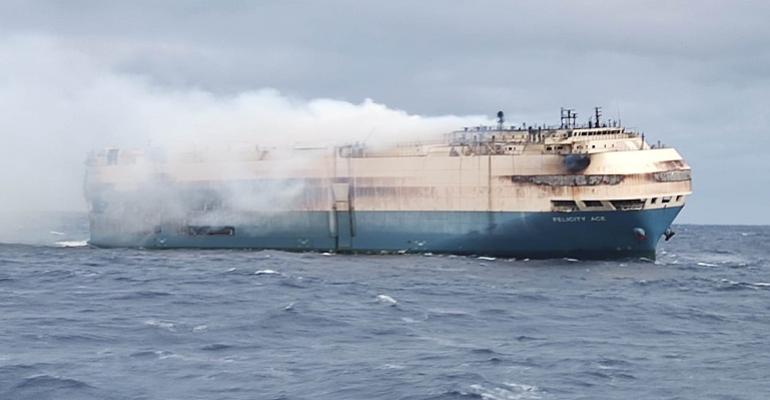 Battery fires were a hot topic at Seatrade Maritime Salvage & Wreck, where panellists stressed the specific dangers of such blazes and the lack of preparedness to deal with them.

Lithium-ion batteries are commonplace in modern life and are the go-to technology for electric vehicle batteries. One failure mode of such batteries is thermal runaway, where the battery expels toxic gases and can ignite, bringing a rapid increase in temperature.

Thermal runaway can be brought on by mechanical stress to the battery, heat stress, or electrical stresses like over- or under-charging.

Where fuel and cargo fires tend to build in temperature and intensity over a matter of minutes, eventually reaching a flashpoint where surrounding materials combust, thermal runaway of lithium-ion batteries can ignite and reach flashpoint and a temperature of over 1000 degrees in a matter of seconds. Videos were shown of buses with lithium-ion batteries moving from venting gases to fierce burning within seconds.

The speed and ferocity of battery fires poses a particular risk to shipping, as current practice when a fire alarm is sounded is to visually confirm the fire before taking action. In a battery fire, the situation develops so quickly that the fire may well be out of control before it is confirmed, and the toxic gases released by burning batteries pose a serious risk to the health of crew approaching a blaze. The same smoke also impairs cameras which may otherwise be used to confirm and monitor a fire.

As a rough guide, the panel said 6,000 litres of toxic vapour can be released from a 1Kw battery, and electric vehicle batteries now range in size up to 110Kw. The gases released include hydrogen, carbon monoxide, carbon dioxide, hydrogen fluoride, hydrogen cyanide, ethane, methane, droplets of organic solvents and oxides of sulphur and nitrogen.

Firefighter Dennis Kusters, CEO, React Emergency Response said an added wrinkle is that the initial vapour cloud from a runaway battery is similar in colour to the smoke generated by a relatively low-intensity fire in a humid environment. The similarity could pose a threat to firefighters who frequently use smoke colours to read a situation.

In ro-ro ferries and PCTCs, ship designs pose further problems in an EV fire as low ceilings trap smoke and some decks are made of aluminium which can easily melt and deform in a lithium-ion battery fire.

Tightly packed vehicles are a feature of both ro-ros and PCTCs, which limits access for crew and fire fighters, especially as any responders approaching an EV fire would need be carrying air tanks on their backs and wearing breathing apparatus.

Adrian Scales, Director of Nautical, Brookes Bell recalled his own experience attempting to run a fire hose on a loaded ro-ro deck during a training exercise. Tight gaps on all sides between vehicles led to multiple 90 degree turns as he and his colleagues weaved between cars, and progress was slow in the bulky and restrictive breathing gear, he said.

The safety advice and firefighting recommendations of electric vehicle manufacturers were scrutinised. Manufacturers variously advise that batteries must not be submerged in water, that fires should initially be treated with CO2 extinguishers and that foam should not be used on electric vehicle fires.

While systems are being developed to deal with electric vehicle fires, the fundamentals of a vehicle on a ship add significant barriers. Closely packed vehicles increase the likelihood of fire spreading, especially when EVs are parked together, reduce access for crew and make technologies like fire blankets much less practical.

Dousing the fire with water may act to slow the spread and cool the surroundings, but the free surface effect comes into play when dealing with large car decks. One study showed it takes 383 tonnes of water to introduce a list to a typical ro-ro vessel, limiting the amount of water that can be thrown at a fire at sea.

Beyond the obvious safety implications of introducing a list to a vessel, a list could also cause water and foam to drain away from area it is being applied to.

While foam technologies continue to be researched and developed, Paul Van 't Hof, Operations Manager, SMIT Salvage said that many common firefighting foams experience high burn off rates in the extreme heat of electric vehicle fires, and while foam systems can be used to fight intense fires, it takes a significant amount of time and foam to bring such blazes under control.

There are efforts to develop technologies to help fight electric vehicle fires, from using drones to remotely monitor fire conditions, remotely operated robots to bring firefighting equipment to the scene and even remotely controlled magnetic robots to puncture holes in the hull to allow foam injection.

As it stands though, the panel said much more needs to be done to address the specific safety implications of electric vehicles on ships, from updating firefighting response guidelines to changing company behaviours.

Thermal runaway is more likely to lead to ignition when a battery is over 50% charged, and a significant portion of battery failures happen when a vehicle is being charged. The panel questioned the practice of offering electric vehicle charging points on ships, potentially increasing both the likelihood and severity of an EV fire.

The panel closed by stressing that the industry has no time to waste in addressing these safety issues as carriage of large lithium-ion batteries is happening right now and becoming more common.  Maritime safety is already behind the curve on the issue and risks falling further behind, they said.