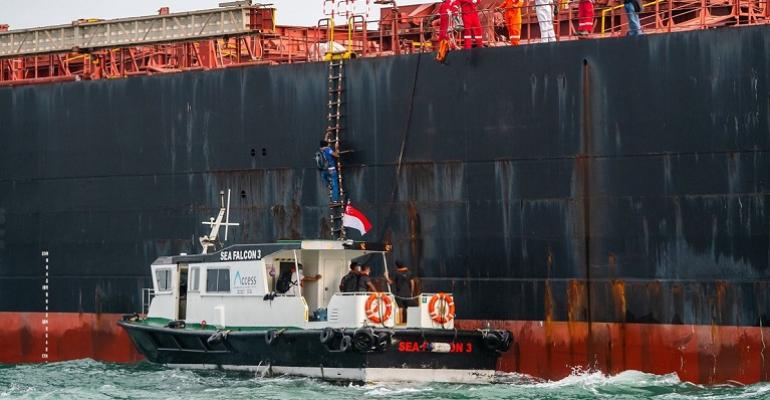 Crew change in Singapore
Mediterranean Shipping Company (MSC) has made an urgent plea for a crew change solution for seafarers onboard the chartered bulker Anastasia stuck off the coast of Northern China.

MSC has been attempting crew change since June this year on the 92,216 dwt bulker, managed by MSC Ship Management, but has been thwarted first by changes in regulation, and then later refusal by charterers to allow for a deviation. The Anastasia is currently among dozens of vessels waiting at the port of Caofeidian, North China.

“MSC has repeatedly requested during the ship’s voyage that the seafarers onboard should be relieved to return home to their families. These proposals have not yet been implemented by the chartering parties which determine the ship’s movements,” the Geneva-headquartered shipping company said.

“China has prohibited a crew change at Chinese ports due to Covid-19 restrictions and MSC’s mid-December requests for a crew change at anchorage or in Japan, a few days sailing away, have not been carried out.”

MSC said it first attempted crew change in June in Hong Kong, and a subsequent attempt in August was prohibited after the Hong Kong authorities tightened Covid-19 restrictions. Approval for crew change was granted in Mitusure, Japan in late August but not carried out.

“During the period August to December, further attempts to permit a crew change in Manila, Hong Kong, Singapore and Busan were also refused, including as recently as 17 December 2020 after MSC suggested a potential deviation to Japan for crew change,” MSC said.

The company expressed deep concern over the situation and the fact that as technical manager for the ship it was not able to simply divert for a crew change as this could result in arrest of the vessel. “This would only perpetuate the problem and may result in the crew remaining onboard for even longer than necessary,” MSC said.

There has been growing concern and anger in the industry over charterers blocking crew changes, and is a particular issue on the dry bulk trade between China and Australia where crew changes are not permitted at either end of the voyage. In early November Intercargo highlighted the issue of charterers preventing crew changes even where owners were willing to pay additional costs.

“MSC has already shared information with various authorities and encourages governments to take an interest in forging a solution to this growing humanitarian problem, not only for seafarers onboard the Anatasia, but also on dozens of other non-MSC vessels in the area which we understand to be stuck in a similar situation due to trade issues between China and Australia.

“We have brought the matter to the attention of the UN International Maritime Organization, and other international governmental and industry bodies,” MSC said.