Decarbonising shipping – focusing on the challenges and opportunities 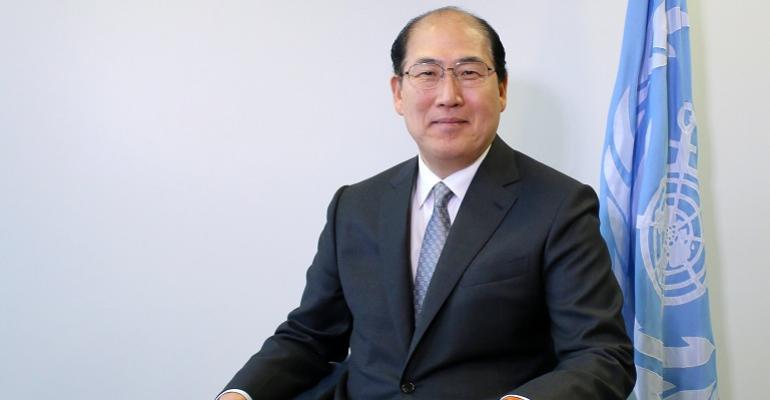 The challenges and opportunities of decarbonising shipping, and the switch to new fuels were in focus among senior executives and officials speaking at the SMM virtual press conference on Monday.

In a pre-recorded message, IMO secretary-general, Kitack Lim, stressed amongst other things the scale of the task faced by shipping as it confronts the challenges of decarbonisation over the next three decades.

He highlighted the importance new steps taken by the IMO in October to limit emissions from ships, and stressed the importance of a global regulatory regime. He was also the first of several speakers to highlight the continuing plight of many thousands of seafarers stuck at sea or unable to sign on and earn money.

With SMM physical event in Hamburg cancelled due to the Covid-19 pandemic the SMM digital conference starts today and is available free online throughout this week, and includes – gmec the global maritime environmental conference on Wednesday held in cooperation with Seatrade Maritime.

Overall, however, the mood was upbeat. DNV GL’s Knut Ørbeck-Nilssen described 2020 as a remarkable year for the uptake of gas as a marine fuel which, he said, had “really kicked off in deep sea trades”. Ships with gas as part of their propulsion systems now account for about 30% of the orderbook. This, he said, is a significant step forward for owners who do not yet know which future fuels may be available. In the meantime, gas is one of the most robust alternatives, he said.

Sea Europe chairwoman, Kjersti Kleven, described the current plight of the European shipbuilding industry which, with its key focus on cruise ship construction, has been particularly hard hit. But Ms Kleven believes that there are also enormous opportunities provided that shipyards and equipment suppliers have sector-specific support to overcome the current pandemic challenges.

He said that the company had set out some time ago on its decarbonisation journey, with recent developments including the conversion to LNG of one existing ship and the contracting of six dual-fuelled 23,500 tei container vessels at DSME in South Korea.

Andreas Schell, ceo of Rolls-Royce Power Systems, stressed the importance of converting globally available regenerated energy into e-fuels. This, he said, was a top priority despite their relatively high cost today. However, he noted that buoyant demand for such fuels which would help to bring the cost down.

Dr Martin Stopford, non-executive President of Clarkson Research, expressed his support for IMO initiatives to analyse the carbon efficiency of existing ships, through measures including the Carbon Intensity Indicator (CII), likely to be introduced in January 2023. Stopford said this was an important step forward in what he views as a four-stage marine fuel transition process.

The CII, he said, would prove invaluable during the first “wave” of technology involving the 100,000 ships that are on the sea today. “We have to inoculate them against emissions by doing what we can for those ships because they are the first focus,” he explained.

Stopford then described the other waves. The second would involve the construction of new diesel and dual-fuel ships with improved emissions performance, but which will be necessary for years to come. The third wave will involve gas, hybrids, batteries and cryogenics. Finally, the last phase looks likely at present to involve all-electric power systems, he said, though this might prove not to be the case as technology develops.

President and ceo of Hamburg Messe, Bernd Aufderheide, revealed the organiser’s ambitious digital conference plans between Tuesday and Friday of this week. Inspiring discussions are likely, he said. However, despite the successful arrangement of SMM Digital and its virtual conference proceedings, he affirmed the company’s intention to hold the event physically in Hamburg once again in the second half of 2022.