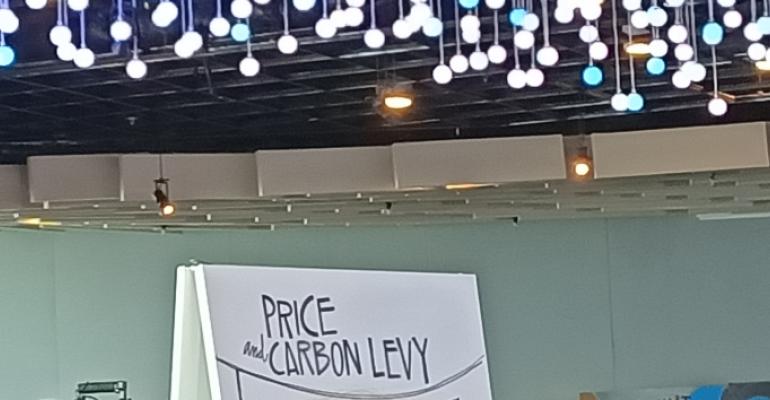 A carbon levy was one of the areas looked at by a working group comprising leading industry executives at the forum’s annual summit on Thursday morning.

The group’s ideas were presented as part of the closing of the summit by Andreas Sohmen-Pao, chairman of BW Group, which is a project partner of the Global Maritime Forum.

Sohmen-Pao said that the clear consensus of the group was a carbon levy was needed. “It’s coming and we should shape it. The IMO has set the trajectory, politicians are demanding it, this train is leaving the station.”

On the reasons that the industry should be pro-active on a carbon levy the group saw that from a defensive point of view it prevents a badly designed outcome.  Taking the more positive view he said, “We have the opportunity to reshape the industry for the future, create new commercial opportunities and to prevent human calamity, let’s not be on not be on the wrong side of history on this one.”

The cost impact on consumers would remain a tiny fraction of overall cost with a carbon tax of $33 per tonne of CO2 VLCC with crude oil from the Middle East to Singapore for refining, and then ship the refined product on an LR1 to Rotterdam also a $33 per tonne of CO2, which would equate to an additional 0.2 cents per litre to the customer at the petrol pump.

In terms of collecting the levy Sohmen-Pao said the industry could use the existing IMO data collection system to ensure compliance.

This would form a “maritime green fund” to develop new propulsion systems and fuels, and the scaling and infrastructure of these fuels. At $10 per tonne of CO2 this would be an $8bn fund, at $75 per tonne levy it would a $75bn fund.

The fund would be administered by a supranational body. “We think it should be under the aegis of the IMO but have its own governance system,” he said. This would include a professional management team and a board of trustees.

In terms of promoting the carbon levy and fund the group felt they should work through existing organisations such as shipping associations and the IMO. “But we can create an industry coalition to ensure the conversation moves forward,” Sohmen-Pao said.