Regulatory framework seriously behind on container fires at sea 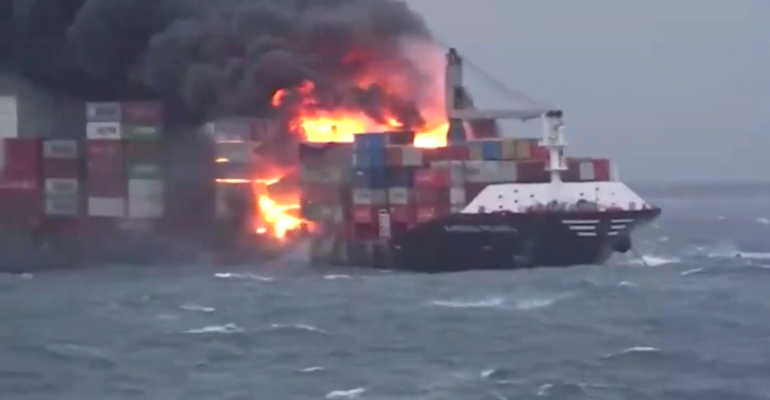 Seafarers are ill-equipped to tackle fires at sea and regulations are lagging way behind. Most ships lack suitable fire-fighting equipment which, in any case, has not kept pace with the dramatic increase in ship size. And the frequency of undeclared or mis-declared cargoes is a continuing cause for concern. These were some of the conclusions on which participants agreed at a Lloyd’s Register webinar yesterday.

Staged under the classification society’s Safetytech Accelerator banner, ‘Cargo fire – has the time come to re-think how we innovate out of it’ highlighted a number of areas of deep concern. Alfred Gomez, Director of Marine Standards and CSO for Seaspan Ship Managemnent, pointed out that seafarers undergo five days of fire-fighting training once every five years and are far less capable of tackling fires than fire-fighters ashore. Moreover, fires at sea often involve cargoes that are far more dangerous that most fires ashore.

This year has seen the high-profile cargo fire on the containership X-Press Pearl which led to an explosion and ultimately the vessel sinking offshore Sri Lanka, as well as the explosion onboard the boxship Ocean Trader while at berth in Jebel Ali. And there are many more smaller less well reported cargo fires onboard containerships.

Nick Chubb, founder and managing director of Thetius, a marine technology specialist, said that regulators and regulations were well behind latest developments in the field and that owners and operators should see today’s regulatory framework as the very minimum compliance standard. However, encouraging progress was being made, the ex-seafarer said, based on new technologies and artificial intelligence (AI).

Splitting these into three groups, Chubb identified the screening of cargoes, making sure dangerous cargoes were stowed in the right place, and crew response in emergency as key issues. He highlighted ZimGuard, AI-based screening software to detect mis-declared hazardous cargoes prior to loading. He also mentioned Scanreach, a Norwegian company that provides sensor-based wireless monitoring systems over an entire vessel to provide early warnings of temperature changes or the presence of smoke or gas.

Related: ZIM turns to AI in battle against mis-declared cargoes and container fires

TT Club’s Risk Management director, Peregrine Storrs-Fox, emphasised ‘adjacency risk’ in cargo stowage, mentioning the important contribution being made by the Cargo Incident Notification System (CINS). There were also tools available now to identify unreliable shippers and potentially undeclared or mis-declared cargoes, he said. Carriers would, of course, like to share such information but had to keep an eye on competition law.

Deputy Inspector of Marine Accidents at the UK’s Marine Accident Investigation Branch, Danny Harwood, commented that his work focused on the aftermath of incidents. He described the scale of the challenge relating to shipboard fires as “almost unimaginable”, stressing the vital role of training and shipboard drills.

However, tackling a container ship fire was certainly beyond the capabilities of a ship’s crew, and probably even professional fire-fighters. He noted that almost invariably, in post-incident investigations, fire-fighting installations on board ships were found to require attention.