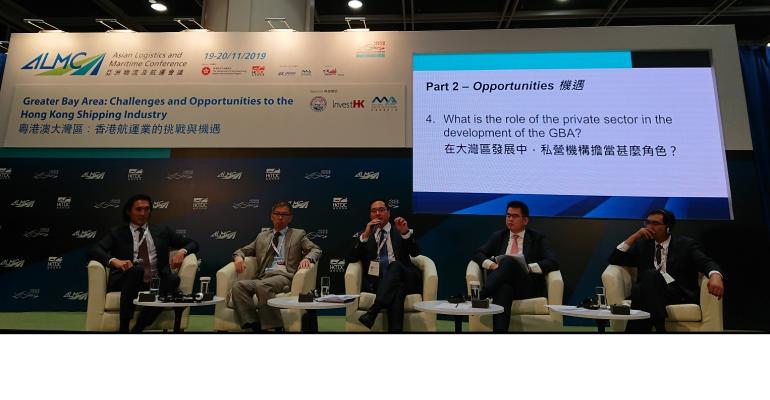 Leaders from the maritime, legal and banking sectors in Hong Kong see huge business potential in the Greater Bay Area and stress that governments need to listen to voices from the private sector.

Speaking at the forum entitled “Greater Bay Area: Challenges and Opportunities to the Hong Kong Shipping Industry” as part of the Asian Logistics and Maritime Conference held in Hong Kong today (Wednesday), Min Li, partner of Reed Smith Richards Butler, said the Hong Kong and mainland authorities are considering allowing contracting parties in the Greater Bay Area to choose Hong Kong law as governing law in contracts of deals with no foreign element involved as a measure to boost confidence of foreign investors.

Li mentioned that there is possibility for the Hong Kong and mainland governments to relax the restriction on bringing disputes to an arbitration tribunal outside the mainland for contracts in absence of foreign related elements in the Greater Bay Area.

“We have seen this restriction being relaxed in certain areas in China such as Hainan Province,” Li said, adding that such measure could help promote Hong Kong’s quality arbitration service to the mainland.

Kenneth Lam, chairman & ceo of Credit Agricole Asia Shipfinance, said the large pool of talent in the Greater Bay Area would be a driving force behind future prosperity of the region.

Lam made a bold prediction that with such huge talent pools combined with the capital and investment in technology in the Greater Bay Area, the region could come up a solution the propulsion system which would cut the industry’s carbon footprint.

Concurring Li’s view, Su Xingang, director of China Merchants Energy Shipping Co said China with its 700,000-strong seafarers, is a strong support to the Greater Bay Area. Su added that apart from human resources support, the mainland would back the region’s development in respect of shipbuilding, technology, sources of cargoes and even economic development.

Role of the Private Sector

Commenting on what role does the private sector play in unleashing the potential of the Greater Bay Area, Lam suggested the private sector is vital in providing the necessary information for decision makers to abide to the changes of environment and regulatory movements.

“That spirit can be shared between the Hong Kong government and the GBA government, and to the Chinese government,” Lam said.

Meanwhile, China Merchants’ Su suggested that a combination of government-backed and privately-run structure might be a viable model. He uses China Merchants as an example saying that it is a listed company and at the same time a hybrid organization backed by the government.

According to Su, government-backed institutions have more sufficient capital while private companies tend to invest and operate in more flexible and responsible ways.

In conclusion, moderator Hing Chao, executive chairman of Wah Kwong Maritime Transport Holdings Limited, said that Hong Kong has a lot to offer in respect of law, finance and overall aggregate wisdom and knowledge of the industry, not only in shipping but in the container port operation and high value ship finances, and in all the grey areas in between these service providers.

Therefore, Chao proposed that it is necessary for the private sector’s opinions to be asked and respected in the future development of the Greater Bay Area.