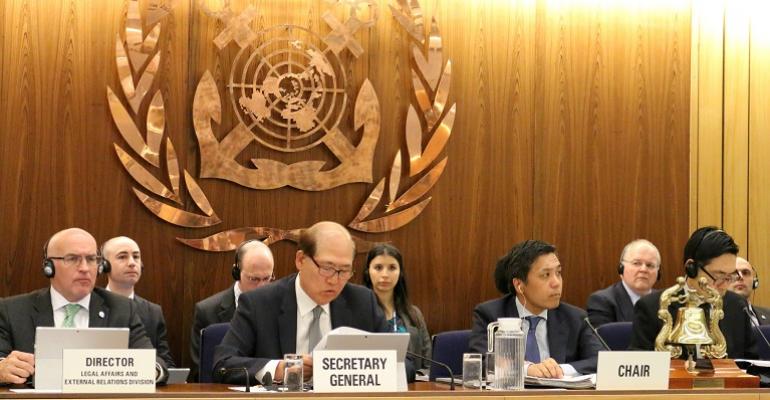 Global shipping faces a sea change in its regulatory framework as the industry comes under growing pressure to initiate fundamental changes to its operations more quickly. The maritime sector must now prepare for a wider regulatory framework that will probably include more regional measures.

As if continuing to maintain efficient operation of the world’s principal supply chains throughout an extended global pandemic were not challenge enough, the international shipping industry is also facing a period of unprecedented regulatory change. But unlike fundamental developments in the maritime sector’s past, some of today’s initiatives concern the welfare of our planet and are being scrutinised closely by many people from outside the industry.

The advance of technology, notably the digital revolution, is transforming long-established principles of ship construction, navigation, fuel management, vessel maintenance, and ultimately, end-of-life recycling. But by far the greatest challenge that the industry faces is the urgent decarbonisation of its operations.

Ultimately, this will involve the adoption of entirely new carbon-neutral and zero-carbon fuels and the handling, storage and propulsion technologies that accompany them. In the meantime, it involves a long, hard look at ways to improve the efficiency and reduce the carbon profile of existing ships.

Against this backdrop, delegates preparing to attend the International Maritime Organization’s MEPC 76 meeting, to be held from June 10-17, will be well aware that the UN Agency is now not only dealing with global shipping’s internal regulations, but also with world challenges that ultimately affect the health of the planet. 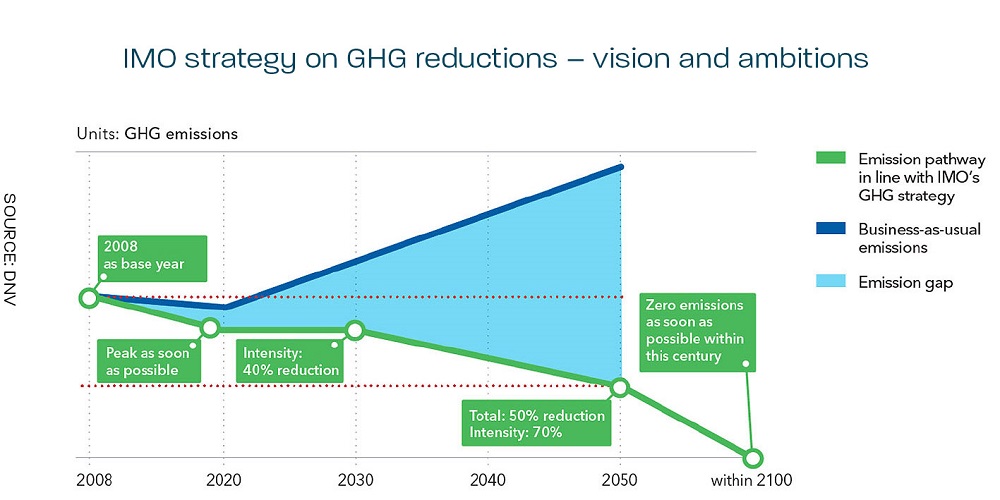 They will also be uncomfortable that the IMO is facing growing criticism from outside the maritime sphere for introducing measures on shipping decarbonisation, for example, that some feel do not go far enough and will take too long. In recent weeks, the Agency has also come under fire from heavyweight shipowners, also critical of slow progress.

The industry’s international associations – BIMCO, International Chamber of Shipping, Intertanko, amongst others – still maintain that shipping’s regulatory framework should continue to be controlled at a global level by the IMO. But a growing number of industry insiders are concerned that the IMO’s slow pace will lead to the introduction of regional regulations that complicate the already challenging business of ship operation.

While engine makers and ship designers undertake pilot projects with new sources of energy and fuels including ammonia, hydrogen and hybrid arrangements incorporating batteries, shipping’s most immediate challenge is what to do with the existing fleet. With this in mind, the IMO has introduced two new measures of ship efficiency and carbon intensity – the energy efficiency existing ship index (EEXI) and the carbon intensity indicator (CII).

Both are likely to be formally approved at MEPC 76 and will enter force in January 2023. EEXI will mean that the vast majority of existing ships will need to meet or exceed efficiency benchmarks for different ship types, and CII will proscribe new limitations on carbon emissions.

Individual ships will have to be shown to comply with the new measures, depending on size and type, in time for the next survey at which a new International Air Pollution Prevention (IAPP) Certificate is due to be issued. For many ships, therefore, time is tight.

However, although a quick-fix approach may seem like good business sense, experts warn that a short-term strategy could prove expensive later. The IMO’s carbon-reducing framework aims for continuous improvement in ship efficiency and carbon emissions reduction between now and 2030, as a waypoint in the voyage to 2050. 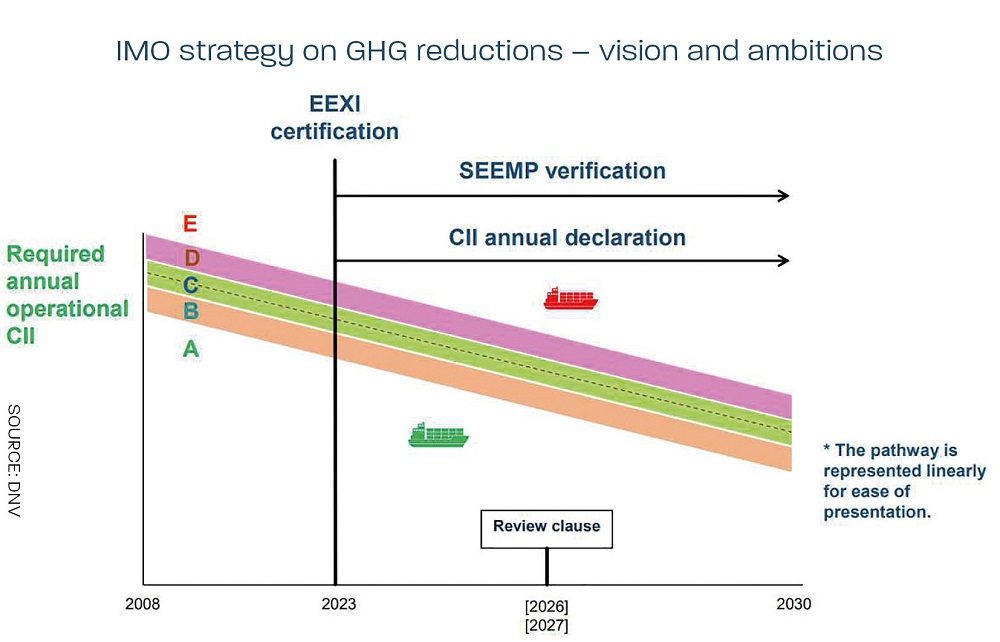 Lloyd’s Register’s Dr Chris Craddock, Technical Advisor and Ship Performance Manager, noted recently that it is important to differentiate between the initial requirements of EEXI and the longer term implications of the CII which will need to be monitored consistently, not least because the IMO will undertake an appraisal of progress in 2026.

The CII will rate vessels in one of five categories – A to E – with the lowest two, D and E, requiring remedial action. Options, he said, could include engine or shaft power limitation, leading to a loss of speed, and/or the adoption of Energy Efficiency Technologies (EET) such as bulbs, ducts, fins, propeller adjustments, air lubrication and hull coatings.

However, Craddock warned that the two parameters should not be viewed in isolation. “Should adaptions or changes to vessel operations be required to meet the incoming EEXI requirement, it may make commercial sense also to consider steps to address operational carbon intensity reduction simultaneously,” he wrote in a recent paper.

“For vessels that fail to meet the required EEXI and where options need to be assessed for compliance,” he said, “the approach employed needs also to consider how the options will impact the CII rating of the vessel and maintain ratings of A to C.”

Despite calls by shipping organisations for a unilateral global framework designed to reduce shipping’s carbon emissions, the European Union is pushing ahead with its own setup which, as things stand, will affect ships trading in and out of the bloc, and within it, from January 2022. EU regulators have now completed a consultation period with and are now working on an impact assessment. However, despite the disruption caused by Covid-19, the EU is still expected to release its proposals in July.

There are many concerns across the maritime sector. One, that the EU initiative will be seen as an example and lead to a patchwork of different schemes in different regions. Two, that the proceeds of such a scheme will leak out of the shipping industry and not be available to meet the enormous costs associated with the development of new fuels and related infrastructure.

Three, that some voyages involving European ports could be priced out of the market. And four, as London’s EA Gibson Shipbrokers pointed out recently, that ship operators could face a new currency risk because bunkers are priced in dollars and the ETS will operate in euros.

Perhaps more important than all of these, however, is who will pay. The extra costs of low sulphur fuel in Emission Control Areas have mostly been passed on to charterers, but it is not clear whether this will happen again. If shipowners have to bear some of the cost themselves, operating in European waters will prove less attractive than elsewhere, potentially pushing up the cost of sea transport across the European continent.

It is too early yet to detail the possible implications for shipping of the G7 finance ministers’ initial agreement on revisions to international corporate taxation rules. However, the taxation framework for global shipping is highly complex and underpins many of the industry’s long-established business models.

WFW, a London law firm, explained some of the implications prior to the G7 announcement on June 5. The introduction of a ‘global minimum tax rate’ for companies, it said, was designed to prevent tax competition between states and the shifting of profits to low-tax jurisdictions.

“Its application to shipping would undercut the policies behind tonnage tax systems,” the law firm said, revealing that shipping had sought, but not yet been granted, an industry exemption from the rules. “While not true of every shipping company, for many in the industry there is no corporate tax in the places where their services are provided and limited taxation in their home states,” WFW said.

Brazil to sign agreement with 10 countries to speed up customs clearance
May 13, 2022