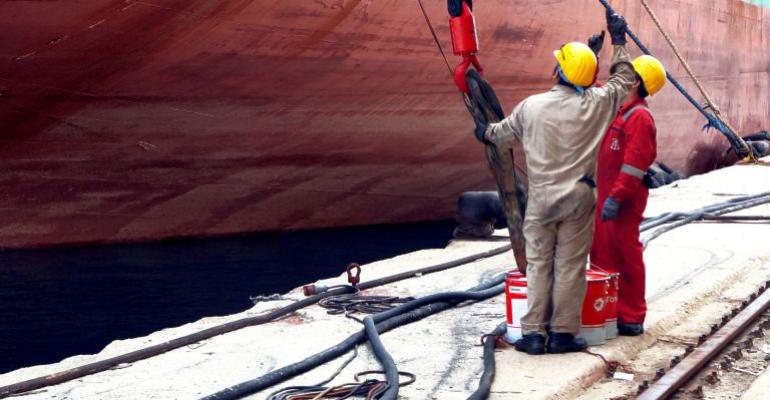 Two webinars around last Thursday’s Day of the Seafarer drew attention to the misery of some 400,000 stranded seafarers who cannot return home to their families or, conversely, sign on for new employment.

Some ship-locked mariners are being denied access to internet communications and are not being paid. Unable to send money home, they are increasingly anxious about the plight of their families.

In a webinar organised by the Standard P&I Club and the Mission to Seafarers, the mental state of many mariners was highlighted as a growing concern. Capt. John Dolan, Deputy Loss Prevention Director at the Club, said that depression, isolation, frustration and anxiety are now widespread emotions among ship personnel.

The Mission to Seafarers’ Secretary General Andrew Wright revealed that demand for the charity’s services has never been greater. And his colleague, Ben Bailey, Director of Advocacy and Regional Engagement, said that some mariners are even being denied access to essential medicines.

A growing number of mariners are now potentially at risk of suicide, but some shipping companies’ HR departments have been criticised for a lack of action. “They respond only when a risk becomes a fatality and therefore ‘an incident’ that needs action,” one insider commented, adding that a whole range of support strategies exist to support seafarers working 24/7.

The fragile mental condition of many seafarers and coronavirus-related claims for detained ships or vessels prevented from docking could lead to a spate of defense claims under mutual insurance FD&D cover. In the longer term, the poor mental health of many seafarers poses a wider threat to safe ship operation. One shipowner is “scenario-planning” and preparing an emergency response based on a worst case where the entire bridge team falls ill with the virus whilst crossing the Pacific.

Obviously, shipowners are doing everything possible to avoid the virus coming on board, but as more crew changes are undertaken and with more exposure to port personnel, the risks increase commensurately.

The crisis is being felt on many shores too. Last year, each Filipino mariner remitted an average of $18,571 to loved ones in the Philippines, the world’s largest supplier of seafarers, leading to a total of $6.5bn in foreign remittances over the year. The statistics were cited by Father Paulo Prigol, Southeast Asian Coordinator of Stella Maris, a 100-year-old maritime charity which supports mariners regardless of race or faith. The organisation is now supporting 745 families in the Philippines who otherwise could not put food on the table.

In a webinar organised by the IMO, Guy Platten, ICS Secretary General, Stephen Cotton, General Secretary of the ITF, Father Paulo Prigol and Niels van de Minelis, Head of Operational Affairs at the Royal Association of Netherlands Shipowners, renewed calls on governments, flags and port states to assist in providing support and logistics networks for the movement of seafarers. All agreed that seafarers are “key workers” and should be treated as such.

Van de Minelis added: “We’re all in this together. Governments are required to do the right thing. Unprecedented measures are required.” He revealed that Dutch shipowners have been working on plans with the country’s airline, KLM, for special repatriation charter flights. But logistics were hampered by national regulations, visa restrictions and other virus-related issues.

Referring to the world’s seafarers, whose tireless work ensures that global supply chains remain intact, he said: “We salute them. They are heroes just like health professionals.”