Seafarer abandonments on the rise over last 18 months 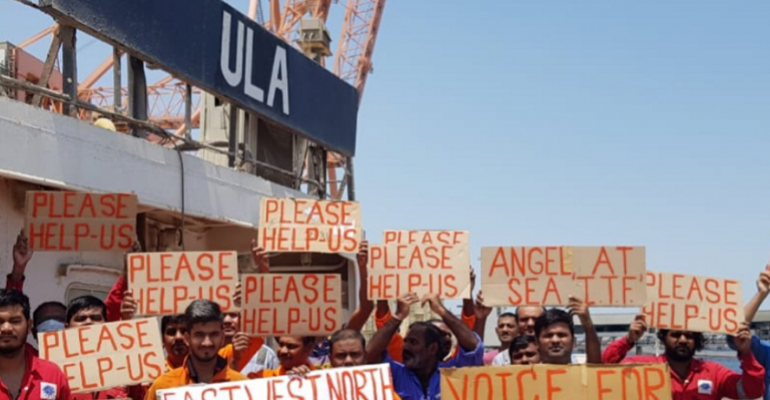 The crew of the Ula abandoned off Kuwait
Seafarer abandonment cases have risen over the last 18 months and industry organisations are calling on flag and port states to take their responsibilities more seriously.

The growth in seafarer abandonments since the onset of the of the Covid-19 pandemic was detailed and discussed in a panel at the CrewConnect Europe Virtual Event on Tuesday. International Chamber of Shipping (ICS), Director of Employment Affairs, Natalie Shaw, noted that abandonments had increased over the last 18 months, perhaps because more companies had gone into liquidation.

Speaking about the situation the Middle East and Gulf region, Revd Canon Andy Bowermann, Regional Director Middle East and South Asia for the Mission to Seafarers, said: “Over the past two years or so we have been involved in some way over the repatriation of over 100 seafarers.”

Looking specifically at this year Shaw said that there had been around 50 cases of abandonment of seafarers. The highest number of these cases came from Panama-flagged vessels – some 18 identified by the International Transport Workers Federation (ITF). While it was understandable Panama as the largest flag state had the highest number, Shaw noted it was still much higher than other states.

Apart from Panama the next highest number of cases came from Iran, Cameroon and Mongolia, and then Bahrain, Ukraine and Bolivia all had multiple cases. This also highlighted an issue related to states that had not ratified the Maritime Labour Convention (MLC) - Ukraine, Cameroon, Bahrain, and Bolivia are not party to the MLC.

The MLC provides that shipowners must have mandatory insurance cover for abandonment. Looking at the cases over the last 18 months Shaw said: “23% of those cases are for vessels which are not covered for insurance obligations under the MLC 2006. The reality is for those cases its extremely difficult to gain appropriate resolution if there is no action to call upon.”

There are three layers of default for action – the Flag State, Port State and lastly country of nationality, with the labour supply nation have an obligation if it has ratified the MLC. However, Shaw said: “India has the highest number of abandonments but doesn’t seem to react to repatriation of its seafarers at home. The mechanisms available are not honoured.”

Warring noted that in 2019 there were cases of vessels flagged with states that had ratified the MLC that did not have abandonment insurance. ”Given that part of the MLC requires the insurer to give 30-days notice prior to the withdrawal of that insurance I am not quite sure how the flags allow these vessels to continue to operate, or how their declaration of maritime labour compliance remains in place.” In addition some vessels had received Port State inspections yet had been allowed to sail.

Bowermann saw a need to look beyond the MLC for solutions.  “We do need to find some alternative approaches outside MLC to tackle some of these things, across my region very few states have ratified the MLC so we need to find some different approaches how we tackle these issues,” he said.