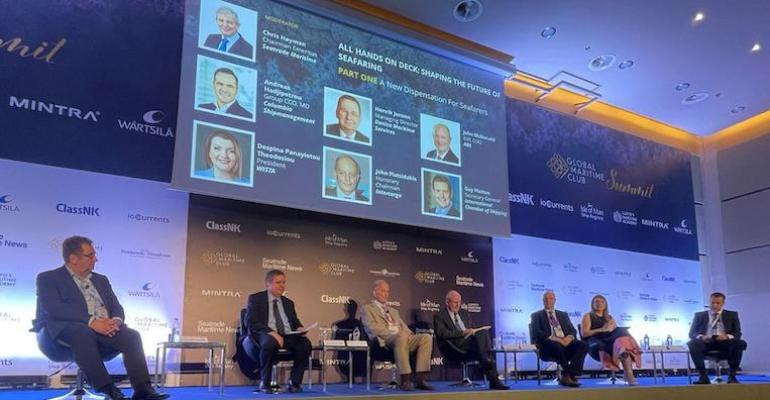 The pandemic has highlighted the key role of seafarers but much needs to be done in terms of training and recruitment to avoid shortage of senior crew in the future.

As has been well-documented the pandemic saw up to 400,000 seafarers being forced to work beyond their contracts due the barring of crew change by governments, and them being denied basic human rights such as healthcare. The issues of the pandemic and seafarers for the future were addressed by the second panel at the Global Maritime Club Summit organised by Seatrade Maritime at Posidonia 2022.

Panellist John Platsidakis, Honorary Chairman, Intercargo stated: “I think it has been a success story of the shipping industry and a big failure of the societies, the governments, and the regulators.”

Related: Cognitive, digital and soft skills will be sought after in seafarers

However, the trials and tribulations faced by ship’s crews during the pandemic to keep the shipping industry running have raised the profile and value of seafarers in the industry. Andreas Hadjipetrou, Group CCO, MD, Columbia Shipmanagement, commented, “We have learned all of us an industry to respect the seafarers more, we already initiated a process where the seafarers are being treated in a better way than before.”

Guy Platten Secretary General of the International Chamber of Shipping (ICS) agreed saying, “One over-arching good thing that’s come out of it is we now recognise seafarers a vital component into world shipping.”

While the pandemic has been positive in terms of how the industry views seafarers it faces challenges with recruiting and training future generations to go to sea.

At the opening of the Summit Greece’s Minister of Maritime Affairs and Insular Policy Giannis Plakiotakis highlighted a potential shortage of 90,000 by the end of the decade.

The extent to which the industry is faces shortage of seafarers both now and in the future proved to be a matter of contention among panellists.

Henrik Jensen, Managing Director of Danica Crewing Services, highlighted that 15% of international seafarers are either Ukraine or Russian nationals, and some Ukrainians wanted to return home, while some owners no longer wanted to employ Russians. He said he’d never seen a situation like that was happening now.

Platsidakis, however, was unconvinced by repeated warnings in recent years about a shortage of seafarers, “If there is a shortage we would end up with laid up ships which is not the case.”  Recognising though there might be a tightness of supply of seafarers due to the war in Ukraine, what he said what had to be addressed by the industry was continuing to raise the standards of seafarers.

The need to improve standards and training was an issue other panellists agreed on. John McDonald, Executive Vice President – Chief Operating Officer of ABS said, “I would wholly agree that competency is something that we really need to start looking at in terms of crews and seafarers, and even off the deck plates as an industry as whole.”

The twin transformations of digitalisation and decarbonization will require new skillsets. “Those seafarers that are onboard those vessels will have to have a whole new competency level,” he said.

The industry also faces challenges in terms of recruitment needs to have new young seafarers coming through to train in these competencies and meet the challenges of tomorrow.

Despina Panayiotou Theodosiou, President, WISTA told the audience, “In general as an industry we need to create an attractive industry proposition to get young people, men and women to consider shipping. We not only need them because we need the numbers but because the young people will have the energy for the transformation that our industry’s going through, whether that’s decarbonisation or digitalisation and they will still be here 15 or 20 years later.