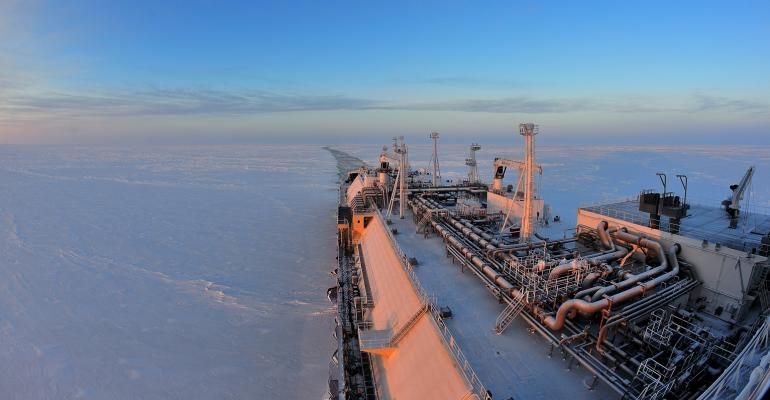 Sovcomflot Arctic LNG tanker, Christophe de Margerie
European dependence on Russian oil and gas, and war-related sanctions that are becoming stricter by the day, are set to tighten energy supplies in many countries.

At a Poten & Partners webinar yesterday, experts could see few short-term replacement options and coal is staging a comeback as the marginal sources of power both in the east and west.

The firm’s Head of Business Intelligence, Jason Feer, set the scene. European gas imports increased dramatically in the year from January 2021 and the continent now depends on Russia for 40-41% of its gas requirements. However, the war-related withdrawal from Russia of energy majors including BP, Shell, and ExxonMobil is making buyers of Russian gas increasingly nervous, he said.

Melanie Lovatt, a Poten Finance Advisor, noted that finance would become increasingly difficult. US sanctions are tougher than those prevailing in Europe, she said, but these are tightening too. She pointed to “sentiment running ahead of sanctions” including the diversion of Sovcomflot’s Arctic LNG tanker, Christophe de Margerie, from the UK’s Isle of Grain terminal to the Montoir terminal in France. Another Sovcomflot tanker had been prevented from loading oil in Scotland, she said.

Feer pointed out that the Nordstream 2 pipeline from Russia to Germany via the Baltic Sea is now on hold. This would have doubled Nordstream 1’s annual capacity to 110 billion cubic metres. Other supplies of gas are urgently needed but there is very little spare regasification capacity in northern Europe, with facilities clocking up around 93% utilisation in January although lower in February.

Terminals in the Netherlands, Belgium and Poland have been operating above nameplate capacity, Feer said. There is some flexibility in the south of the continent but insufficient pipeline capacity to the north.

Poten Forecasting Specialist, Kristen Holmquist, noted that the US exported a record daily volume of LNG in January and February but this is not sustainable because of maintenance requirements. Turning to the US to solve gas shortages elsewhere may be possible for now, but is not a long-term strategy, she said. Meanwhile, LNG from new US capacity due on stream within the next few years is largely spoken for by way of long-term deals.

Asian buyers need to rebuild stocks and China’s gas demand continues to climb, Poten’s Sophie Tan noted. However, the firm’s head of Business Intelligence in Asia Pacific said that Asian buyers are usually reluctant to sign long-term gas contracts, although these can provide a more advantageous position from which to negotiate other short-term requirements.

She said that China’s world-leading rate of demand growth was underpinning moves to fix new deals, including three recent contracts with Qatar. But the country’s fallback position, she said, is more coal.

The Russian war and the tight energy backdrop “threatens to blow a hole in decarbonisation”, Feer concluded. China, India, and Europe are all burning more coal, he said. Tan noted that gas is the main driver of decarbonisation across Asia where it is seen as a transition fuel. However, the process will certainly have to slow down, she said, at least for this year.