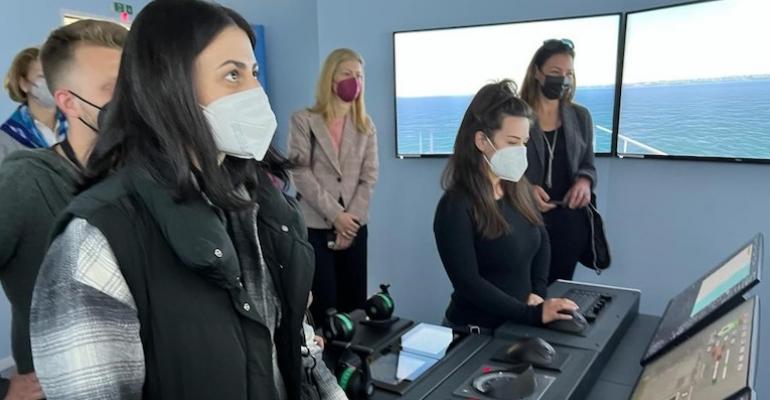 Speaking ahead of the inaugural IMO International Day for Women in Maritime, Petraki said the involvement of the IMO in raising awareness of diversity issues in our industry is important, so long as action and attention remains beyond days of celebration.

Petraki said that in her 24-year career and her time studying maritime business and maritime law before that, there are a lot of differences between the modern maritime industry and that of the past.

‘When I started my career, there were not so many women around, although I come from a family where my mum also used to work in shipping. Now it's massive. In the beginning of my career, I would see many women lawyers involved, but now it's all over the sector and have seen change’ said Petraki.

‘The most important thing I've seen WISTA doing, and it has worked for myself, is the networking, bringing people together. You get the paradigm of other people that have succeeded, and you understand that it's easy for you to do it as well.’

Education is another important part of what WISTA does, said Petraki, and the organisation believes in continuous education as the only way to make people qualified and prepared for the difficulties we face every day in our industry.

‘In WISTA Hellas we are running a leadership program specifically for women in maritime with big graduate business schools in Greece. We have three universities supporting us and we jointly give scholarships for Master's degrees for ladies in the shipping, logistics, and in maritime businesses.’

Where there has been less change is at sea, said Petraki, which is an area of focus for WISTA Hellas and WISTA organisations around the world.

‘With Posidonia, WISTA Hellas is is taking the initiative of having a seminar where we will talk about women at sea. We will try to give good examples of the companies that have succeeded in integrating women into the workforce, and women who are captains or mechanical engineers and how they have succeeded.’

The aim of the event is to show the industry that while it may initially involve difficult changes to create the right environment onboard, women can be successfully integrated into crews and ships and companies alike are better for it.

‘On an international level, I know that WISTA International has worked with Anglo Eastern to create a booklet on safety issues for women at sea. So these are initiatives that we now have, and I'm sure in the future, we will have more where we can tackling the issue because it's not a problem. It's just an issue that we have to overcome.’

Petraki views shortsea shipping as a potential gateway for female seafarers looking to get experience at sea without committing to long deployments in unknown environments and removing some of the stresses seafarers undergo as highlighted recently by the pandemic.

‘Short sea shipping is an area where women can more easily go on trips, because the stress factor is out. Like in the cruise industry, there are many more women on board in short sea shipping.’

Through her work in the Hellenic Short Sea Shipping Association, Petraki sees companies doing their best to hire and retain women.

‘We have to stress that the environment has to be right on board. We need for these women to be safe, and be happy on what they do. And of course, there are many companies with longer haul voyages that do have women onboard, and it works.’

The short sea market in Europe is facing stresses of its own, mostly in the form of upcoming regulatory changes both at EU and IMO level and how they will affect a fragmented market mostly comprising smaller companies with smaller assets. For these kinds of companies, associations are even more crucial both for alerting companies to upcoming changes, and for relaying the concerns and input of smaller owners and operators to those regulatory decision makers affecting markets.

While smaller companies in the shortsea sector may not have the means to invest heavily in new technologies like those needed to meet environmental goals, the sector is an ideal test bed for such equipment.

According to Petraki, the shorter times at sea, smaller scale of the vessels and predictable trade patterns are ideal for testing technologies like ammonia- and hydrogen-fuelled ships, but outside assistance is often needed.

‘We are not talking about huge companies who have enormous amounts of money that they can use to test and invest in experiments.’

Countries like Norway and Germany have managed to access funds for environmental technologies in shipping through their own governments and the EU, and Southern Europe needs to do the same, said Petraki. Companies big and small have accepted the need to decarbonise and are onboard, but for now access to alternative fuels and funding are a hurdle for smaller owners.

One area owners can and are making progress on decarbonisation is in retrofitting existing vessels, where upgrades like new propellors, better paints and more intelligent engine management are making gradual improvements to efficiency and performance. ‘Everybody is trying to do something,’ said Petraki.

Although regulatory pressure on the shortsea shipping market could lead to consolidation, Petraki hopes the industry finds another way forward.

‘Consolidation might need to happen because it will give the companies the power and the means to facilitate and to follow all these new regulations. The reality is that some small companies will not have the means and the costs will be huge for them. But we will see, I do remember in the 90s when the ISM was coming into force. We were crazy, wondering which small companies would not be able to adapt and would not exist anymore. Everybody adapted and moved forward.’

One strength of smaller companies is in their agility and ability to adapt, Petraki added, something she expects will come into play during the transition to zero carbon shipping.

‘Think about how I introduced myself: chartering, operations, business development. Maybe we have a more hectic job, but it's a smaller fleet, so it can be done. We are involved in every area that is necessary. Maybe that's the way for us that we survive.