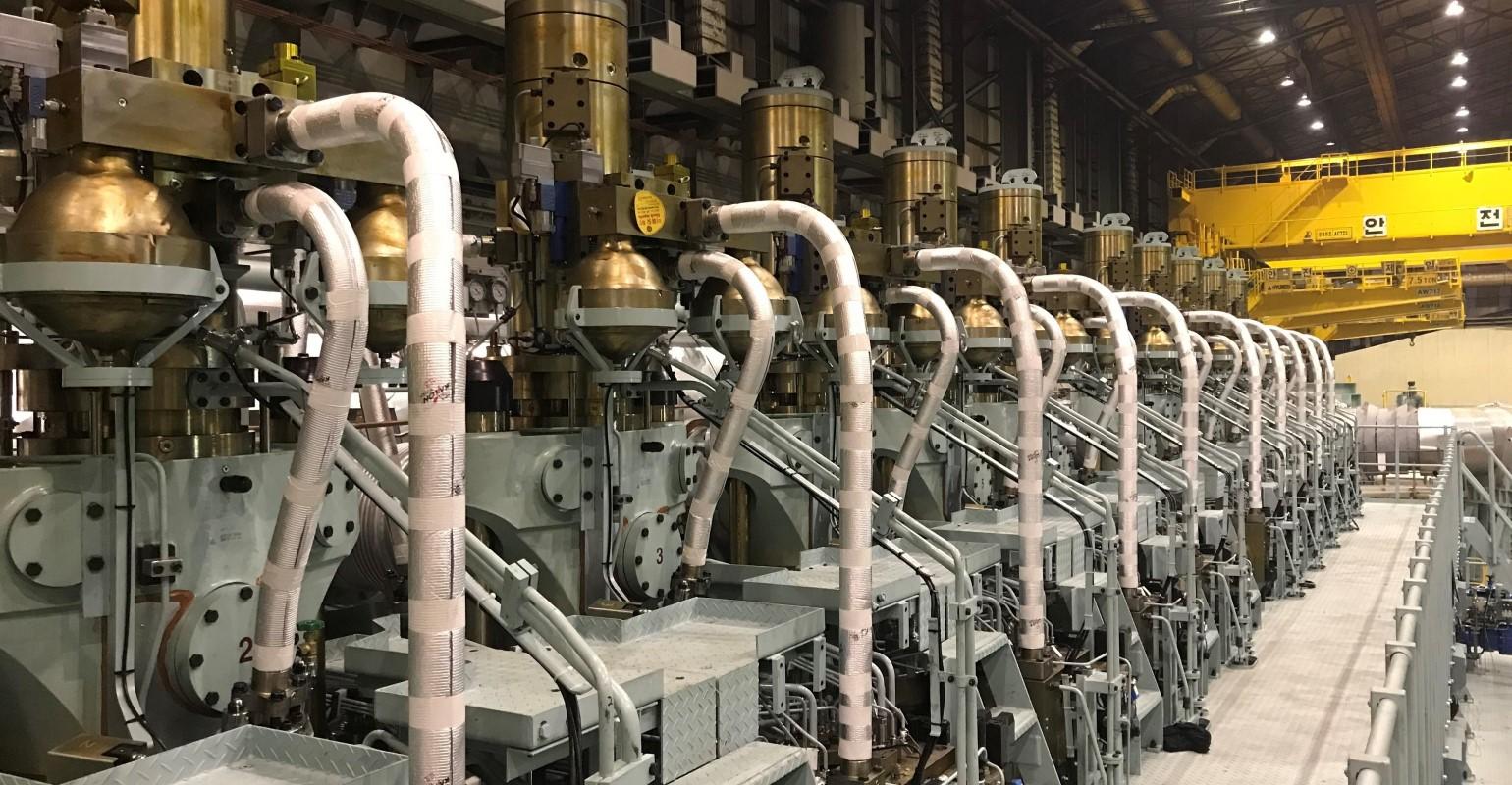 MAN's Dual-Fuel 11G90ME-GI
The shipping industry is proactively looking for new fuels, given the tough challenge ahead to meet the International Maritime Organization (IMO)’s 2050 target of reducing greenhouse gas emissions by 50% compared to 2008 levels.

Currently there are several alternative fuels such as hydrogen and ammonia, but these are still a relatively new concept to the shipping industry. While some major shipping and energy companies have begun undertaking trials for such fuels, many experts have cautioned about the immediate availability of such new concept fuels.  This is because the protocols for how to use such fuels safely on an industrial scale, as well as the relevant infrastructure to support such new fuels is largely not established.

In the meantime, very low Sulphur fuel oil (VLSFO) was developed by fuel producers to meet the IMO Sulphur cap regulations which came into effect from January last year.

Related: When capacity is at a premium, container layers are filled nine high

While shipowners can opt to install scrubbers, the low price spread between high Sulphur fuel oil (HSFO) and VLSFO may well mean that more are choosing VLSFO over the high cost of scrubber installation.

However, some industry players have raised concerns over this new transition fuel, associating it with potential detrimental effects to both people and the environment. While some of these claims are yet to be verified, we have witnessed several issues associated with VLSFO usage from an operational point of view.

Chemically, VLSFO is a relatively new fuel using a range of blending components to assist the fuel’s stability and compatibility.  In order to meet sulphur requirements for VLSFO, more paraffinic blendstocks are required, but we are also increasingly seeing some “unusual” blendstocks being used, simply because they have low sulphur content.  Some of these blended VLSFO fuels then appear to be more vulnerable to thermal stress and oxidation than traditional HFO.

Prolonged storage and even conventional treatment of VLSFO on board may result in sludge formation inside the tanks and fuel treatment systems. This may eventually lead to handling difficulties such as filter and purifier clogging and poor combustion of the fuel, which can potentially damage the engines. In general, we are tending to see a shorter “shelf-life” for some VLSFO than would be expected from traditional heavy fuel oil with regard to stability and sediment formation.

Therefore, it comes as no surprise that as part of our recent experience in attending to fuel cases in Asia, we have increasingly witnessed fuel sediment and sludge issues, evidenced by the fuel purifier and filters having to be cleaned frequently, adding to the crew’s workload.

Wax formation has also been a common problem we have encountered, particularly when the fuel has a low viscosity and high pour point. This can cause problems as while the fuel must be heated to deal with the wax, it can also encourage instability.

While it was originally anticipated that VLSFO might suffer some problems due to cat fines being excessive in blend components, we are not seeing this as a major issue (yet). Compliance to sulphur regulations was an initial issue, as suppliers were simply blending too close to the limit. Unfortunately, we are still seeing some of those issues, which reflect a lack of understanding of environmental responsibility.

Losses incurred from engine damage can be quite devastating and should not be underestimated – we have seen vessels with engine problems experience serious difficulties completing their voyages.  By way of example, we have been involved in a case concerning a serious engine failure, and the vessel had to deviate to the nearest port. Extra costs were incurred, which then became subject to a disagreement between the shipowner and charterer as to where the costs fell.

Besides causing operational problems on board, extra logistical challenges for the charterers and shipowners may be created if the VLSFO has to be de-bunkered.

In the event of a dispute concerning fuel quality, it is important to obtain representative samples of the fuel for testing. The samples, which will subsequently be tested in a laboratory, will in most cases identify if any of the fuel ‘s physical characteristics do not meet specification or if the fuel contains any potentially detrimental components, which may have led to the onboard machinery issues.  However, during these Covid-19 times, it has become increasingly difficult to board ships to ensure that representative samples have been taken.

While we are excited by the possibility which future fuels can bring to shipping, the industry will still be heavily reliant on VLSFO for years to come. Future improvements to this relatively new fuel are hoped for in the near future as “teething issues” are resolved, but shipowners and charterers should still be aware of the potential issues that VLSFO can bring beyond IMO 2020.  It can only be hoped that in the scramble to use “new” low sulphur blendstocks for fuel, an eye is also being kept on the quality of these to minimise potential contaminants.