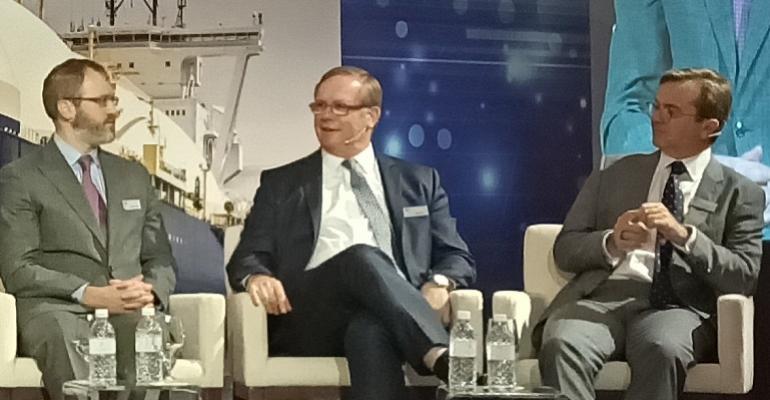 The long talked about LNG carrier spot market is unlikely to see further development according to senior executives from ABS and Poten & Partners.

A surge in speculative newbuilding orders, mainly by new owners to the sector, combined with vessels contracted for liquefaction projects that were delayed, raised the potential for a real spot market LNG tankers, however, long term contracts are expected to remain the norm for most of the fleet.

Michael D. Tusiani, chairman emeritus of Poten told a seminar in Singapore on Monday that of the current fleet of 521 LNG vessels some 321 of these ships, roughly 70%, were on charters of 12 years or longer.

However, charters have been shorter with less 20 or 25-year contracts and more owners accepting much shorter durations of three, five or seven years.

Gary Smith, head of Poten’s LNG commercial team, noted that owners that ordered speculatively were willing to accept charters of three to seven years duration. “My sense is the more established owners are looking for a little bit longer.”

He told the ABS and Poten seminar: “So there’s going to be a little bit of a tussle between those owners who in order to invest $200m in a ship are going to look for longer term employment versus a market that wants shorter and shorter terms.”

Peter Fitzpatrick, ABS vice president, strategic development, believes a new period stability in terms of technological change could drive longer contract periods as there is less risk to the charterers. He expects current standard 174,000 cu m vessels to only see incremental increases in efficiency leading to a similar period as to the late 1990’s/early 2000’s with the 138,000 cu m standard design.

“We’ve gone back to that stability, so maybe the market from a technical point of view is ready to go back to longer term charters,” Fitzpatrick said.

Meanwhile Smith from Poten does not expect to see more speculative newbuilding orders.  “What you won’t see much of any more is owners buying ships to trade on the short-term spot market there’s been enough owners burnt in that market its going to be a long time before we see owners ordering ships with the intention of shipping spot.”

There is though a question of what happens to older steam turbine vessels, mainly on long term charters that still form a significant portion of the fleet.

Jefferson Clarke, head of Poten’s LNG Commercial Analytics team said: “The steam turbine fleet is 43% of the current fleet, roughly 200 vessels, so how that fleet is utilised or whether that fleet is replaced by newer tonnage.”

Smith noted that many of these 138,000 cu m vessels were coming to the end of their 20-year contracts in the next three to five years. He expects newer, more fuel efficient vessels, to snap these contracts when they come up for renewal.

The fate of a significant portion of the steam turbine fleet would most likely be lay-up with owners unlikely to scrap such expensive assets.