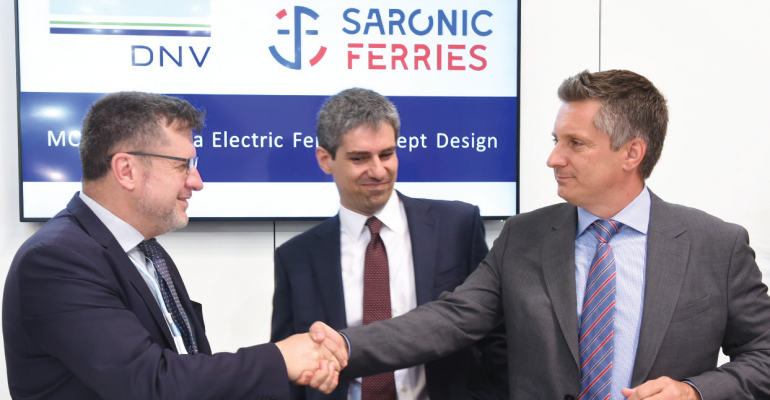 The MoU is a key moment not only for the ferry company which has set an ambitious goal of an emissions-free fleet by 2040, but also for Greece’s vast domestic ferry network.

“We operate the largest fleet in the Saronic islands,” said Joseph Lefakis, a partner in Saronic Ferries, “which are located only a few miles away from the port of Piraeus, Greece’s largest port, where decarbonisation will matter most. Our goal is to partner with forward-thinking stakeholders, such as DNV, and materialise the first fully-electric ferry in Greece.”

A second partner in the ferry company, George Papaioannides, commented: “Our mission is to operate a purely emissions-free fleet by 2040 to all our destinations. We are taking a step towards a cleaner world, and we envision our operation in the Saronic Islands to be the inspiration for others to initiative more green fleet renewal projects in Greece.

However, Knut Ørbeck-Nilssen, DNV’s CEO, Marine & Offshore, has pointed out that Greece’s existing regulatory framework is designed for conventional vessels and will require some changes. He also believes that first-movers may require incentives because significant investments in new ferry technology will be required.

Ørbeck-Nilssen was speaking to Posidonia Today after DNV staged a seminar for the Greek ferry community a few days before Posidonia opened. He said that exclusively electric ferries, probably up to about 100 m in length, would be suitable for short routes in relatively sheltered waters. Larger hybrid vessels, on the other hand, would be more suitable for longer distances. Both would provide substantial emissions-cutting benefits at sea and, importantly, during frequent port calls.

A growing number of ports, he pointed out, are adopting new strategies on the use of auxiliary engines, with shore power arrangements now high on ESG agendas.

DNV has been a pioneer in the development of battery technology, having developed the first industry rules for battery propulsion. Close to half of all vessels with battery installations operate in Norwegian waters. The classification society also has a track record of working with customers to assist in the efficient move from conventional to electric propulsion.

Ørbeck-Nilssen emphasised a range of similarities between ferry routes in the Nordic region and Greece’s own domestic network. And he described how certain routes in the north had been classified as green ocean corridors, on routes such between Sweden and Denmark, for example, and other ports and terminals across the region.

“It’s important to understand that we will be on a journey,” he declared, “but it’s important to get started. And it’s wider than just the shipping community.” He stressed the need to engage with the wider ecosystem, citing cooperation with energy producers and fuel development specialists as examples of this collaboration. Greece, he pointed out, has significant potential to provide electrical power for ferries from renewable energy.

He cited scope for offshore wind and solar power development, both in fixed and floating installations. Combining these opportunities could generate scope for Greece to have ‘green corridors’ of its own, with ships powered by renewable energy on a growing number of ferry routes. This would open up new business opportunities, create jobs, and lead to the development of more local expertise, he said.

This article first appeared in the Wednesday June 8 2022 edition of Posidonia Today, the show daily publication for Posidonia. Read the full edition here.